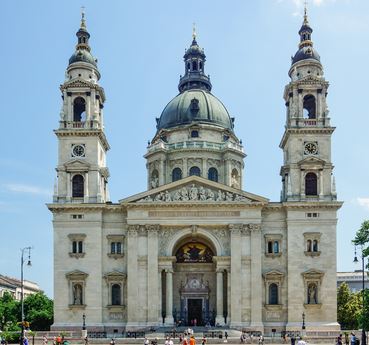 St. Stephen’s Basilica is the largest church in Budapest and can hold up to 8,500 people. Although in architectural terms it’s a cathedral, it was given the title of ‘basilica minor’ by Pope Pius XI in 1931. It took more than 50 years to build the Basilica. Building commenced in 1851, and the inauguration ceremony took place in 1906 and was attended by Emperor Franz Joseph. During its construction, in 1868 the dome collapsed and rebuilding it had to start almost from scratch, which explains the delay in the Basilica’s completion.

The patron saint of the church is St. Stephen, the first king of Hungary. His mummified right hand is kept in a glass case in the chapel to the left of the main altar. The beautiful interior is also noteworthy as it is decorated by famous artists of the era. The most valuable artwork is the mosaic based on Gyula Benczur’s oil painting depicting the allegories of the holy mass. Another beautiful work by Benczur is the painting in which St. Stephen holds up the crown and asks the Virgin Mary to become the patron of Hungary.