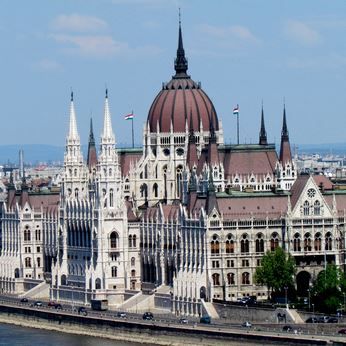 The Hungarian Parliament building, a magnificent example of Neo-Gothic architecture (although displaying Renaissance and Baroque characters too), is just over 100 years old. In the 1880’s an open tender was held for the design of the Parliament building. Construction based on the winning plan began in 1885 and the building was inaugurated on the 1000th anniversary of Hungary in 1896, and fully completed in 1902. Both runner-up designs were also built facing the Parliament building. One is the Museum of Ethnography and the other is the Ministry of Agriculture. The Budapest Parliament building is the third largest Parliament building in the world. It has 691 rooms, 20 kilometers (12,5 miles) of stairs and at 96 meters (315 feet). During the Communist era a large red star was added to the central tower above the dome of the building, but after its downfall, the star was removed. Unfortunately, modern air pollution constantly attacks the porous limestone walls, requiring frequent restoration. This also means that there is a good chance that you will see some scaffolding around the building.

Guided tours of the Parliament are available when the National Assembly is not in session. The tour takes about 45 minutes, and is well worth the price, as it covers the main entrance stairs and hall, one of the lobbies, the old House of Lords and the Hungarian Crown Jewels. Tours are held in several languages.