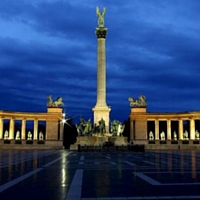 Laid out in 1896 to mark the thousandth anniversary of Hungary, Heroes’ Square (Hősök tere) is the largest and most impressive square of the city. Located at the end of Andrássy Avenue and next to City Park, surrounded by two important buildings, Museum of Fine Arts on the left and Kunsthalle (Hall of Art) on the right.

The Millennium Monument in the middle of the square was erected to commemorate the 1000-year-old history of the Magyars. Archangel Gabriel stands on top of the center pillar, holding the holy crown and the double cross of Christianity. The seven chieftains who led the Magyar tribes to Hungary can be seen on the stand below. Statues of kings and other important historical figures stand on top of the colonnades on either side of the center pillar.

When the monument was originally constructed, Hungary was part of the Austro-Hungarian Empire and thus the last five spaces for statues on the left of the colonnade were reserved for members of the ruling Habsburg dynasty. The Habsburg emperors were replaced with Hungarian freedom fighters when the monument was rebuilt after World War II.