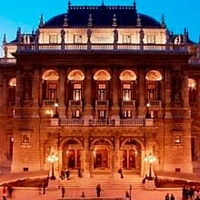 The opera house in Budapest stands as one of the most beautiful Neo-Renaissance buildings in Europe. When it was opened in 1884, the city shared the administrative duties of the Austro-Hungarian Empire with Vienna. In fact, Emperor Franz Joseph commissioned its design.  The Budapest Opera House is considered to be amongst the best opera houses in the world in terms of its acoustics, and has an auditorium that seats 1200 people. It is horseshoe-shaped and, according to measurements done by a group of international engineers, has the third best acoustics amongst similar European venues (after the Scala in Milan and the Paris Opera House). The statue of Ferenc Erkel stands in front of the Opera House. He was the composer of the Hungarian national anthem and the first music director of the Opera. The other statue in front of the Budapest Opera is of Ferenc Liszt, the well-known Hungarian composer.

You can tour the Opera House during the day and learn about its gorgeous architecture as well as enjoy a world-class performance in the evening. Guided tours are offered daily at 3 pm and 4 pm in English, François, Deutsch, Italiano and Español. Tours in Japanese are offered Mondays and Saturdays. Tickets are available in the Opera Shop and tours take about 45 minutes.