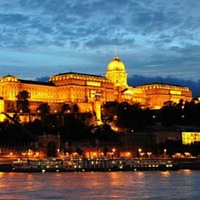 Today, Castle Hill is recognized as a World Heritage Site, and has many must-see attractions, Gothic arches, eighteenth-century Baroque houses and cobblestone streets. Though Castle Hill has changed much since building began in the 13th century, its main streets still follow their medieval paths.

Buda Castle Hill is also home to a large interconnected cellar system that consists of natural caves created by thermal waters and man-made passageways. Part of the cellar system can be toured at the Buda Castle Labyrinth and at the Hospital in the Rock Museum.

Fishermen’s Bastion (Halászbástya) is only 100 years old, and is a favorite lookout. In medieval times, the fish market was nearby and the bastion was built to commemorate the fishermen who protected this part of the city. The seven tent-like turrets symbolize the seven Hungarian tribes that arrived to the Carpathian Basin in 896.