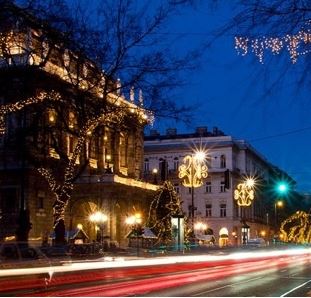 Andrássy Street, recognized as a World Heritage Site, was built to connect the city center with City Park (Városliget). Construction began in 1872, and the avenue was inaugurated in 1885. Its Eclectic Neo-Renaissance palaces and houses were built by the most distinguished architects of the time. Aristocrats, bankers, landowners and noble families moved in. The iconic avenue was named after Prime Minister Gyula Andrássy, a key advocate of the project.

Things to Do and See Around Andrássy Street

Andrássy Street is great for walks alongside the beautiful turn-of-the-century buildings or people watching in one of the many cafés. It’s a long avenue, however the Millennium Underground Railway runs beneath it, should you feel tired. The State Opera House and the House of Terror Museum are the most famous attractions on Andrássy, but the avenue is also home to many upscale boutiques, including Louis Vuitton, Ermenegildo Zegna, Burberry and Gucci, and to several other sights.